You are here: Home › About Us

Evergreen Equipment was founded circa 1943 specializing in German made sawmill equipment that was sold to local mills to process logs from the Pacific Northwest region.

In 1947 Allen Ridgeway formed a new company, “Evergreen Machine Works, Inc.” The machinery needed for this new venture was secured by purchasing the machine shop from the belly of a WWII Sub Tender that was being decommissioned in the Zidell Shipyard here in Portland, OR. Our original building was located on the west bank of the Willamette River, where the new Avalon Hotel Complex is now situated. Evergreen Machine Works operated in that location until the late 1970’s. 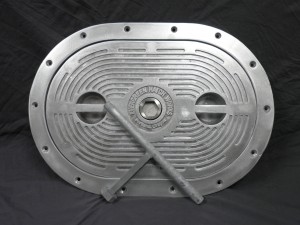 Also in 1947, an agreement was made to become the authorized manufacturer of a newly developed line of Marine Hatch’s designed and developed by the very well known Author and Naval Architect, Ludwig Stanley Baier (L.S. Baier).

As the sole manufacturer of this line of Marine Hatches, along with manufacturing and repair work in a variety of industries in the Pacific Northwest, Evergreen Machine Works, Inc. prospered through the years.

In 1978 a new, modern, crane served facility, with all the space and power necessary to propel us well into the future was purpose built between Interstate-5 and Portland International Airport (PDX).

In 1994 The Baiers Hatch Works, was sold to a California rubber company who successfully took over production of the marine hatch line for a few short years until the company was again sold to the current owners. This was the time of outsourcing here in America, and the company moved much of its manufacturing to China.

This created a new opportunity for Evergreen Machine Works, Inc. to create our own patterns and start manufacturing Hatches under our own name. After 67 years of manufacturing marine hatches, including 18 years under the name Evergreen Hatch; we’re proud to say we’re experts in the Marine Hatch Industry.

With a complete machine shop and fabrication facility, located in a modern, crane served building in Portland Oregon USA, Evergreen Machine Works is uniquely positioned to handle custom projects of any size; In addition to custom modifications to our hatch line unlike our competitors.

Evergreen Machine Works has been manufacturing marine hatch covers since it was founded in 1947. All our hatches are made in the USA, with all-Oregon supplies from local foundries.

Please give us a call for a quote on your job.

Use This Form For More Information or to Get a Quote 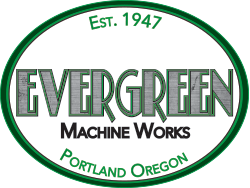 We Provide the Highest Quality U.S. Made Marine Hatches Throughout the Pacific Northwest.